I'm actually done with all the Halloween costumes for this year with enough time left over to post about the fact that I'm all done!
Posted by Becca Bell at 9:15 PM No comments:

Can you tell who this is? 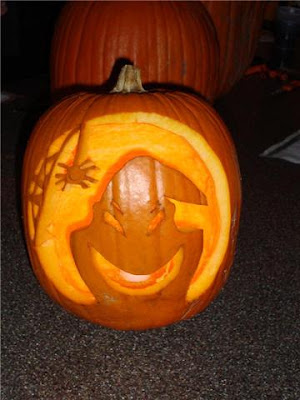 Posted by Becca Bell at 7:34 PM No comments:

We went to a fun Halloween thing at Thanksgiving Point two Saturdays ago. It was a great time. Here are some cute pictures of my kids:
There were lots of animals. 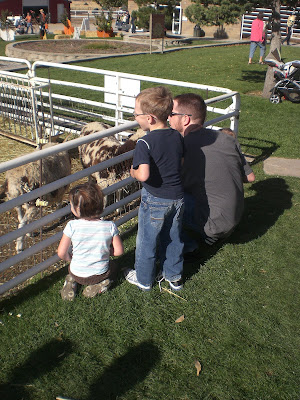 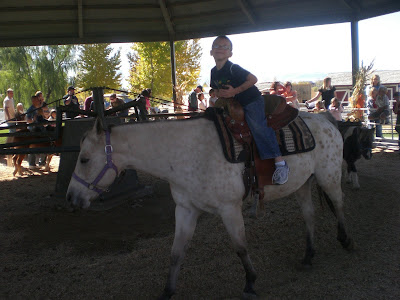 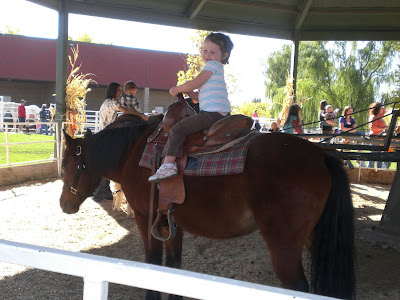 The kids got to play games. 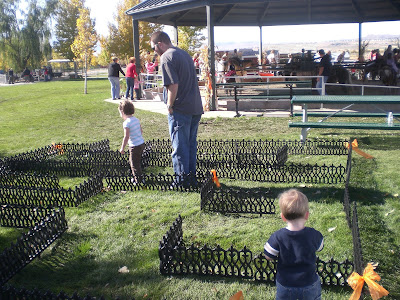 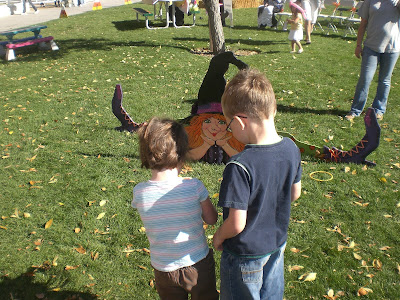 They got prizes for playing the games. Fortunately, they didn't have to be good at the games to get the prizes. 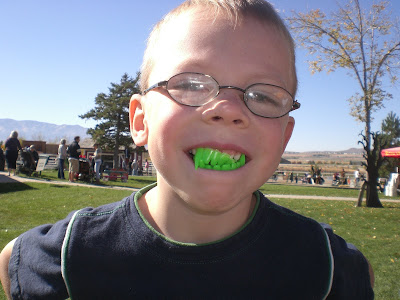 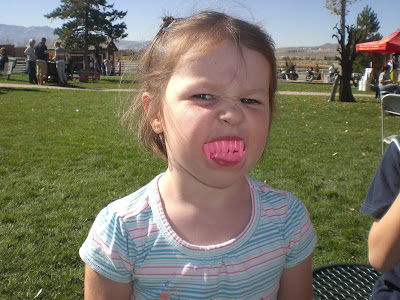 And, as with any occasion, there were super cute photo-ops. 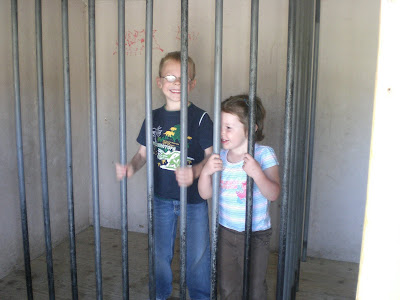 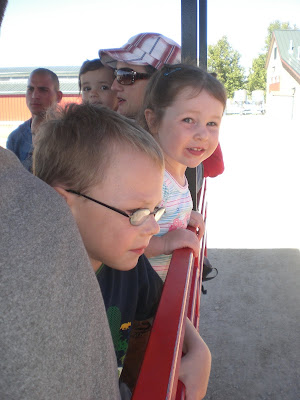 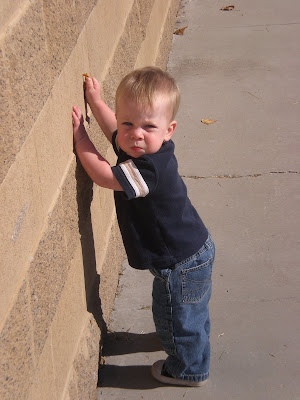 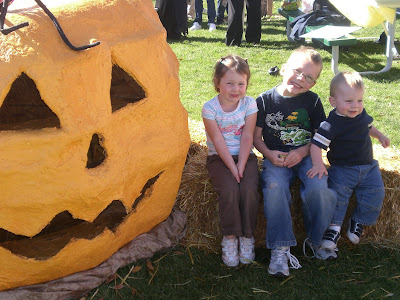 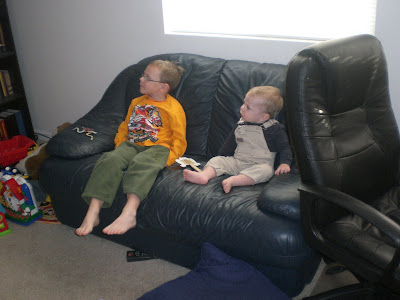 I caught the boys watching crafty shows (what I call any show on HGTV) the other day. This is how they looked while they were watching. Leah refuses to watch crafty shows. I wonder about those kids sometimes......

Posted by Becca Bell at 2:16 PM No comments:

I'm not sure I want to bleed Cougar Blue any more

Mike and I happened upon two good tickets to the BYU vs. TCU home game this past Saturday. We were really excited to go, especially since we haven't been to a game in about 6 years. Unfortunately, the Cougars didn't put up much of a fight and they lost some-really-high-number to 7. The BYU fans however, did put up a fight. And that fight just happened to take place right in front of us. Let me set the scene for you:
We were sitting in the faculty season ticket holder section next to Mike's aunt and uncle (who are kind of old and the nicest, sweetest people!). There were two guys in front of us (also BYU fans) that weren't season ticket holders, but probably just lucked out when buying those seats. It was obvious by the amount of standing they did that they were excited to be there.
Unfortunately, that excitement clouded their knowledge of fan etiquette because they would stand for every play, even if it was a dumb play and they would stay standing while nothing was even going on. No one around them was standing at all. Everyone was sitting and trying to enjoy the game.
After a while, Mike's uncle tapped on guy on the shoulder and asked him to sit down. The guy pretty much just blew him off, even after several pleas on behalf of his little (and I mean short), old wife who couldn't see. By this time, everyone around us was getting annoyed because they weren't just blocking 4 people's views, they were also blocking the field for the people behind and around us.
Mike's uncle made one more attempt to nicely ask the guy to sit down. Instead of doing so, he just scooted over so he was right in front of me. That's when things started to get exciting. The guys around us started to kind of yell at them for not being courteous. The Standers (that's what I'm going to call the two guys) yelled back that they can stand if they want to. Pretty soon, there was lots of shouting between Mike's uncle and the guys around us and The Standers. Finally, The Standers said, "We can do whatever the @#$%&* we want!" and they flipped off everyone in our section. Well, then the bearded guy next to Mike's uncle (We'll call him Beardy) grabbed one of The Standers and sat him down hard. Next thing I know, The Standers had their arms cocked back with fists clenched; everyone was shouting; Mike was holding back one of The Standers so he wouldn't be on top of me or his aunt; Beardy and some others around us were going crazy.
Fortunately, Security showed up pretty quickly to help break things up and get the story of what was going on. A cop also showed up and hauled away The Standers and Beardy. Meanwhile, some weird guy (Nowhere Man) comes over from out of nowhere to defend The Standers. He's shouting at Beardy, calling him a Jack-Mormon. He was saying that he saw the whole thing and the Beardy threw the first punch and that The Standers shouldn't get kicked out. I don't know where he got that from. No one threw a punch and I don't know how he could have seen everything, especially considering I looked for him after he left to see where he was sitting and I couldn't even find him.
So, The Standers and Beardy got to come back just to collect their belongings and apologize. We didn't see them again after that. But, Nowhere Man hung around for a bit to argue with the guy sitting right behind me. So, I'm sitting there with Nowhere Man standing on the bench in front of me and the other guy standing up behind me and their shouting at each other. I could literally look straight up and see them. I got tired of that pretty quickly, so I stood up, put my hands on Nowhere Man's shoulders and asked him nicely to stop and go sit down. Then I turned around and asked the guy behind me to do the same thing.
And the worst part of the whole experience was that all this happened while BYU scored their ONLY touchdown of the game. We missed the whole thing, the replay, the fight song, everything. The whole rest of the game was ruined too. Everyone in the section talked about it for quite a while after. And I'm sure that NO ONE stood up in our section for the whole rest of the game. Of course it didn't help that BYU was playing horribly.
And so, there's my story. It was definitely a memorable experience. Pat yourself on the back if you actually read that whole thing. And now the moral of the story:
Don't be a Jack-Mormon. Tell the truth in all your doings. (Even though the people being accused of lying were telling the truth. Wait, now I'm confused...)
Posted by Becca Bell at 1:12 PM 3 comments: 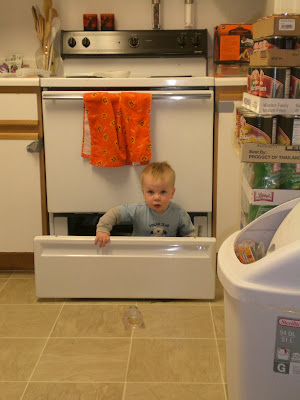 Whenever I cook, Noah likes to be right there, helping me along. He gets out my pots and pans for me. He rearranges my cupboards. He even sorts my pantry. What would I do without him?
(I don't know if you can see it, but I put duct tape on the cupboard doors so that he can't open them anymore. And I always try to keep the pantry door shut.)
Posted by Becca Bell at 1:21 PM 1 comment: 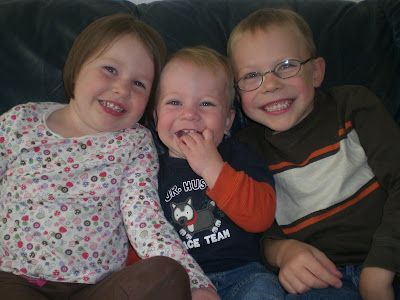 Pics of the faves 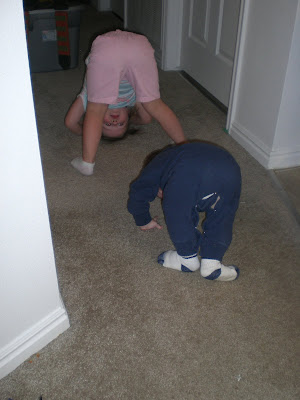 Posted by Becca Bell at 1:23 PM No comments:

Look who's all ready for school!! 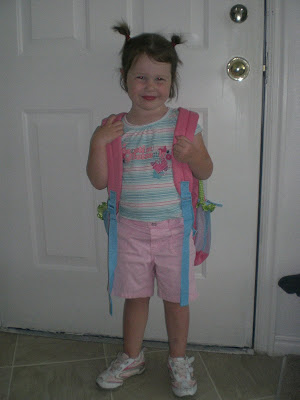 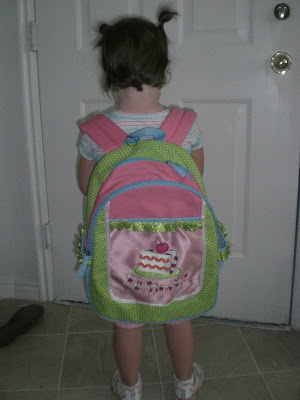 It's just a shame she has to wait about 3 more years until she's allowed to go. It would only be two, but her birthday lands after the cutoff date. I'm not too happy about that!
Posted by Becca Bell at 1:20 PM No comments:
Newer Posts Older Posts Home
Subscribe to: Posts (Atom)