I have to brag a little 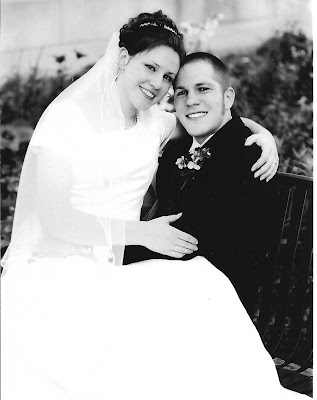 Here are a few of those items to brag about:
1. Mike and I celebrated our 6th wedding anniversary yesterday.
2. I'm still crazy in love with him.
3. Mike's still crazy in love with me.
4. I have 3 great kids with the man I'm crazy in love with.
Finally, and most importantly.....
5. I still fit into my wedding dress!!!
I just tried it on this morning. It's a silly thing I like to do around our anniversary. I was super huge pregnant this time last year, so I didn't even look at the dress. This year, I'm happy to state that I can put it on and zip it all the way up. I can't move my arms, but who cares?!?!
Posted by Becca Bell at 1:20 PM 6 comments: 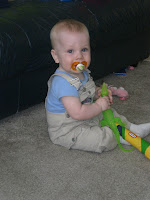 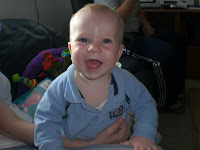 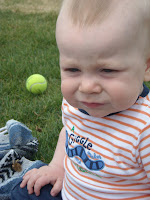 Noah isn't even one yet and already he's developing his mischievous side. He did two things this week that really made me worry about what he's going to be like when he's older.
#1
Like all babies, Noah likes to put things in his mouth. When we were at a playground earlier this week, (or maybe it was last week, I can't remember) he kept trying to put little rocks in his mouth. He would pick one up, look at me, and slowly move his hand to his mouth, wondering how close the rock could get to his mouth before I said something. Of course, I said something every time. He would then promptly drop his hand, but the try again. Eventually, the temptation overcame him and he put the rock in his mouth despite my instructions not to. Knowing what he did was wrong, he started laughing and tried to make a quick getaway. Fortunately, he doesn't crawl faster than I walk, so I was able to easily catch him. I have a feeling this isn't the last time he tries to run away from me. The problem is, he's just going to get faster with time.
#2
I was putting the kids to bed Tuesday night. I decided to put Noah down first so that I could tend to Eli a little easier. I gave Noah a little snuggle, laid him down, and covered him up. Then, I turned around to take care of Eli. While I was covering up Eli, I heard a giggle come from behind me where Noah was in his crib. When I was all done with Eli, I turned around and saw Noah. Instead of laying down like he should have been, he was sitting up with Eli's hat on his head. He must have grabbed it off Eli's dresser (he can reach it from his crib) and put it on his head. He even put it on backward to look cooler. He thought he was so clever and funny that he had done that while my back was turned.
It's a good thing I think kid is cute, otherwise I don't think I could handle such deliberate disobedience.
Posted by Becca Bell at 12:56 PM 2 comments:

I need a little help

I am trying to find a good place to buy shorts for the summer. I need suggestions. I've already tried Target and Old Navy. Old Navy's shorts are too short or maybe it's that my legs are too long or maybe it's both. Target's shorts made me look like I was 36 instead of 26. I know I'm married with 3 kids, but I'm still allowed to look my age, right? So, where do you buy shorts for a good price? I mean less then $20. Please let me know!!!!
Posted by Becca Bell at 12:54 PM 3 comments: 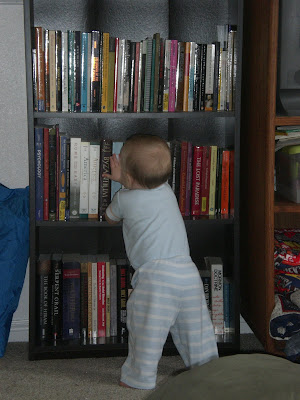 Which book should I read next? Perhaps this one on Byzantium......
Posted by Becca Bell at 7:21 PM 1 comment: 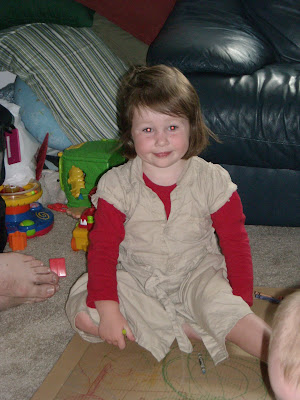 Leah's still young enough to pronounce things in a funny way. One of the funniest words she pronounces wrong is room. Instead of an R, she puts a W in the front of the word to make it sound like womb. So you can just imagine how funny it is when she yells at Eli, "Get out of my room!"
Posted by Becca Bell at 8:31 PM 3 comments: 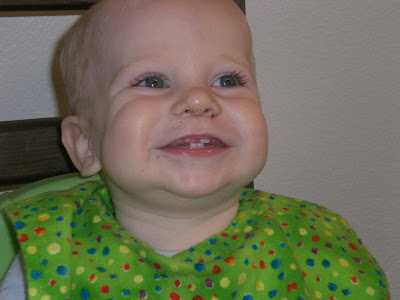 Do you like Noah's new smile? Notice how he only has one top tooth. It's obvious that the second one is going to pop out soon though. OOOOO, I can't wait!
Posted by Becca Bell at 1:31 PM 2 comments:

I think just about every other kid has already finished and I've read the blog entries all about it. Finally, it's Eli's turn to be all done with preschool. I'm so glad! I measured it the other day and found out that since we moved, I've been driving 65 miles a day just to take Eli to preschool. I could have switched him to one by where we are now, but I didn't want to. He had made so many friends and was perfectly comfortable going, so we toughed it out for a few weeks. It's been so good for him!! He's usually a very shy person, but this experience has really helped him in different social environments. He's still not too fond of change though.
Mike and I were both able to go this morning. Since it was totally different from the usual schedule, Eli wasn't happy. He didn't participate in the cute songs the kids had learned for their parents. This is pretty much what he did for the first hour. 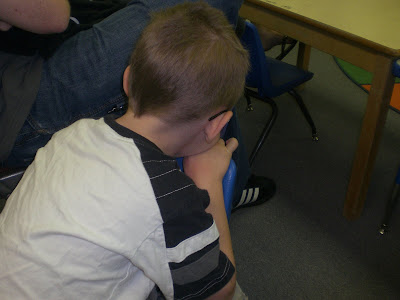 After a bit, he warmed up to his usual self. The morning was very fun. Miss Dani (Eli's teacher) put a slide show together for us to watch. We got to do crafts, play outside, have snack and lunch and there was even a fire drill!!! 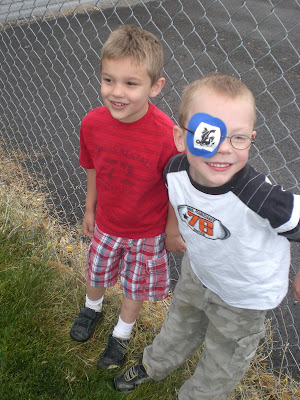 Eli and his buddy, Benjamin, outside during the fire drill. 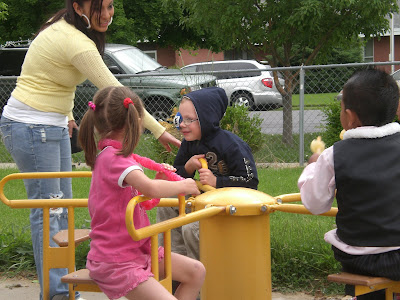 Eli and some kids from his class playing outside. 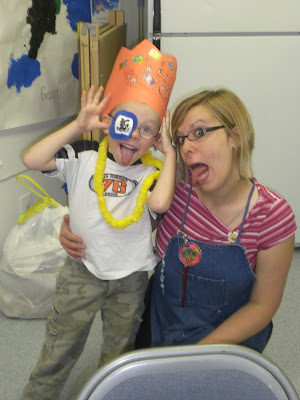 Eli and his teacher, Miss Dani. She was great!!
I'm a bit sad that it's over, but we have new adventures (Kindergarten) not too far in the future. By the way, if you didn't notice, Eli got a new eye patch. It has a picture of a dragon on it. When he wears it, he IS Dragon Fire! He also told the kids in his class that he "ate [his] eye ball with [his] guts." But don't worry, he's growing a new one. I just hope the new one works better then the old one!
Posted by Becca Bell at 2:18 PM 1 comment:

That's where we all sit in a circle and I call out two names. Those two people go in the middle of the circle and get to fight to the death. Got it? If not, then come on over to my house. That's Eli's and Leah's favorite game! They play it all the time. The only bad part is, they are the only two who ever play.

Seriously, Eli and Leah used to be best buddies. Now, all they do is fight from the minute they wake up, literally. The fighting started before 7am today. I can't take it. When they fight, I try to break it up as best as I can, but I'm not a good referee. It's not shouting, just wrestling and bugging each other. You know, poking and kicking and pushing and stupid, annoying, little stuff that builds up to them screaming and crying and hurting each other. I try giving them time-outs and putting them in their rooms. It doesn't seem to help too much. Got any suggestions? Our place is kind of on the small side, so I think part of the problem is there's not too many places for them to go to get away from each other. But they don't exactly want to get away from each other either. I'm at a loss. HELP!!!

What Eli's and Leah's relationship used to be like: 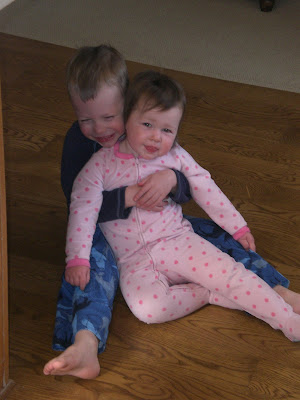 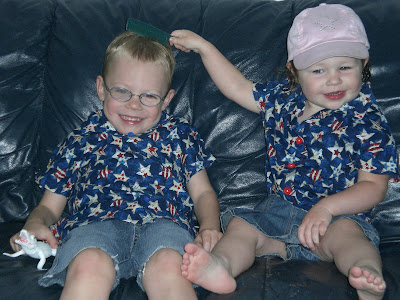 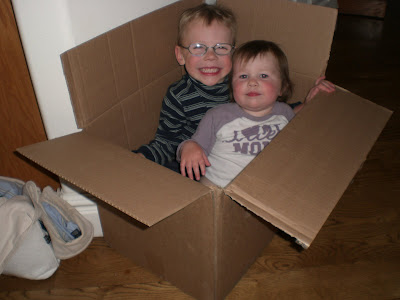 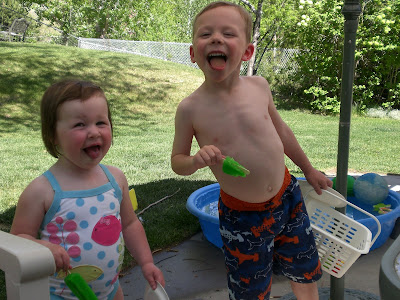 I would post pictures of what their relationship is like now, but I don't want to reinforce the behavior.
Posted by Becca Bell at 7:35 PM 2 comments:

....that while I read Breaking Dawn for the second time, I did not picture Robert Pattinson's face in my head. I don't find him attractive. He will never be "Edward" to me.

Oddly, when I read books, I don't picture the characters' faces. I can picture bodies, scenery, pretty much everything else, just not faces. I don't know why.

Going along with the Twilight theme, have you seen the official movie trailer for New Moon? Holy crap, I'm excited!!!! I had my doubts, but once I saw Jacob do his thing, I almost cheered. Leah was on my lap watching with me. She got excited too. Since then, every time I get on the computer, she asked me if we can watch the vampires. Do you think it's too soon for her to start reading the books?
Posted by Becca Bell at 7:26 PM 1 comment:
Newer Posts Older Posts Home
Subscribe to: Posts (Atom)