On November 27th, my brother and sister-in-law had their first kid. His name is Blaze and he is super, freakin' cute! He came over for a visit the other weekend so his cousins and uncle could have a chance to meet him. They like him too. Here are some pictures of their first meeting along with their thoughts. 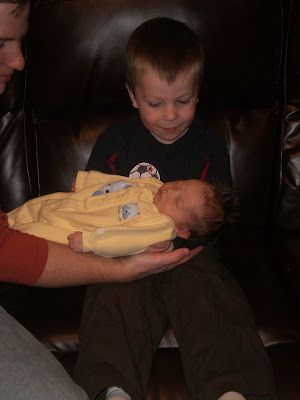 "I thought he was cute and his hair was fluffy. His eyes were blue. And I liked his bear clothes. I like his little handies. They are so cute." 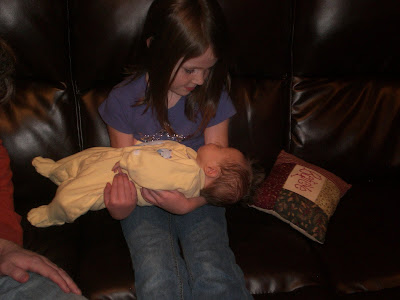 "I thought he was so cute. I liked it when he looked at me. I like his little feet" 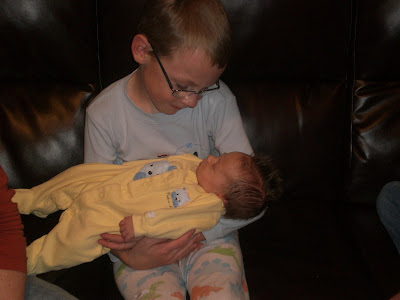 "I thought he was really cute. I like him a lot. He's really little. I tried not to bite through my lip, I was so excited. And I decided I'm going to kiss him on top of his head every time I see him because that's what my Papa would do when he would visit us and Blaze is named after my Papa." 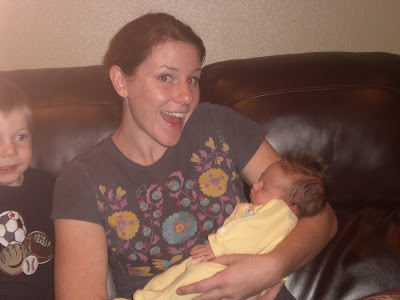 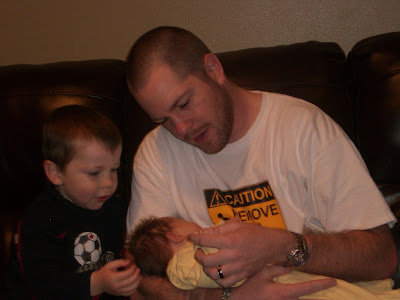 I've seen him since and he's even cuter. I don't think my lip is going last. I'm pretty sure his cuteness is going to make me bite right through it!

Thank you! Thank you! Thank you! Can't get enough pictures of ALL these little cutie pies! So adorable to see the expressions of the "big" cousins with their little cousin! Don't forget to tell Blaze (when he's awake) all about me and that I am the REALLY FUN Aunt. :) (Umm....Aunt Janet can't see this, can she??)
~~~Aunt Wynne

So adorable!! Can't believe we have to wait till Eli's baptism to come and see him!!